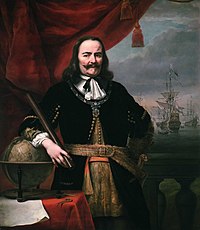 De Ruyter was born in Vlissingen and became a sailor at the age of 11 in 1618. At the age of 22 he was already captain of a merchant ship. In 1641 he fought the Spanish, teaming up with the Portuguese.

In the First Anglo-Dutch War (1652–1654) De Ruyter proved his worth under Admiral Maarten Tromp, winning the Battle of Plymouth. Soon after Tromp had been killed at the Battle of Scheveningen De Ruyter took over the command of the Dutch fleet. Much later he would have to contest command of the fleet with Tromp's son Cornelis Tromp, but remained on top.

In 1659 he fought the Swedes, teaming up with the Danish.

A year before the Second Anglo-Dutch War started he fought the English at the African coast, near Guinea.

In the Second Anglo-Dutch War (1665–1667) his most famous battles were the Four Days Battle 1666 and the Raid on the Medway 1667. The Medway raid was a costly and embarrassing defeat for the English, bringing the Dutch close to London.

De Ruyter saved the situation for the Dutch in the Third Anglo-Dutch War. His victories over larger Anglo-French fleets at the Battles of Solebay (1672) and Texel (Kijkduin) (1673) warded off invasion.

De Ruyter was highly respected by his sailor soldiers, because of his dislike of hierarchy (himself being of humble origin), while at the same time not shying away from bold decisions.

De Ruyter was fatally wounded in a battle against the French fleet near Messina in Sicily in 1676. His body was buried in the Nieuwe Kerk (New Church) in Amsterdam.