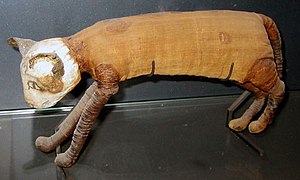 A mummy is a preserved corpse. The best-known mummies are those that have been embalmed with the specific purpose of preservation, particularly in ancient Egypt. In China, preserved corpses have been recovered from submerged cedar coffins packed with medicinal herbs. Mummies are also known to have formed naturally due to environmental conditions, such as extreme cold ([[�tzi the Iceman]]), acid (Tollund Man), desiccating dryness,.

The term is thought to be derived from the Arabic word mumiyah, meaning bitumen; bitumen was once thought to be used extensively in ancient Egyptian embalming procedures due to the blackened skin of unwrapped mummies, though this is now in doubt. Another possible source for the name is the Egyptian Coptic word mum, for wax; unlike bitumen, beeswax really was extensively used in Egyptian embalming.

The history of mummies

The earliest 'mummified' individual dates back to approximately 3300 BC, although it is not a 'true' mummy. The body is on display in the British Museum and has been given the nickname of 'Ginger' because he has red hair. Ginger was buried in the hot desert sand with maybe some stones piled on top to prevent the corpse being eaten by jackals. The hot, dry conditions desiccated the body, preventing the muscle and soft tissues from decaying. Ginger was buried with some pottery vessels, which would have held food and drink to sustain him on his long journey to the other world. There are no written records of the religion or gods from that time, and it is not known if it was the intention of the ancient Egyptians that the deceased were being preserved. By the time of the First dynasty, the ancient Egyptians were definitely aware of what they were trying to achieve.

The Egyptians also expanded the practice of mummification to animals. Sacred animals central to cults, such as ibis, hawks, and cats, were mummified by the thousands.

Preservation techniques were also used by other cultures around the world, such as the Scythians, Incas and other original inhabitants of Peru, and the Pazyryks.

Mummies in the modern world

Mummies have been an object of intense interest in the West since archaeologists began finding them in large numbers. 19th century aristocrats would often entertain themselves by buying mummies, having them unwrapped, and holding observation sessions. Mummies were also believed to have medicinal properties, and were sold as pharmaceuticals in powdered form. However, they were not used as fuel for steam locomotives, and the idea that they were came from a joke by Mark Twain. During the First World War, mummy wrapping linens were manufactured into paper.

During the 20th century, horror films and other mass media popularized the notion of a curse associated with mummies. This more or less facetious belief probably stems in part from the supposed curse on the tomb of Tutankhamun.

Science has also taken notice of mummies. Dr. Bob Brier, an Egyptologist, has been the first modern scientist to successfully recreate a mummy using the Egyptian method. Mummies have been used in medicine, to calibrate CAT scan machines at levels of radiation that would be too dangerous for use on living people. They have been very useful to biologists and anthropologists, as they have provided a wealth of information about the health and life expectancy of ancient peoples. In particular, mummies have demonstrated that even 5,000 years ago, humans were anatomically indistinguishable from their present-day counterparts. This has had important repercussions for the study of human evolution.

Egyptian mummies were much sought-after by museums worldwide in the 19th and early 20th centuries and many exhibit mummies today. Notably fine examples are exhibited at the Egyptian Museum in Cairo, at the [[�gyptisches Museum]] in Berlin, and at the British Museum in London. The Egyptian city of Luxor is also home to a specialised Mummification Museum.

Mummy is also a colloquial name for a mother.