Toulouse (Tolosa in Occitan) is a city in southwest France on the banks of the Garonne River, half-way between the Atlantic Ocean and the Mediterranean Sea. With a population of 1.05 million inhabitants, the Toulouse metropolitan area is the second largest in southern France and one of the fastest growing in Europe. It is the home base of the European aerospace industry and hosts the headquarters of Airbus S.A.S..

Toulouse is the former capital of the province of Languedoc (provinces were abolished during the French Revolution). It is the capital of the [[Midi-Pyr�n�es]] region, the largest region in France although it encompasses only half of the former Languedoc province. It is also the [[pr�fecture]] (capital) of the Haute-Garonne [[d�partement]]. It is the seat of the [[Acad�mie des Jeux Floraux]], the equivalent of the French Academy for the Occitan-speaking regions of southern France, making Toulouse the unofficial capital of Occitan culture. The traditional Occitan cross was adopted as the symbol of both the City of Toulouse and the newly-founded Midi-Pyr�n�es region.

File:LeCapitole.jpg
The Capitole, the 18th century city hall of Toulouse and best known landmark in the city; in the foreground is the Place du Capitole, a hub of urban life at the very center of the city

Fueled by booming aerospace and high-tech industries, record population growth of 1.5% a year (compared with a sluggish 0.37% for France as a whole) means Toulouse metropolitan area hit the 1,000,000 inhabitants mark in 2002 or 2003. Boasting the highest population growth of any European city of that size, Toulouse is well on its way to overtake Lille as the fourth largest metropolitan area of France.

The Greater Toulouse Council (Communaut� d'agglom�ration du Grand Toulouse) was created in 2001 to better coordinate transport, infrastructure and economic policies between the city of Toulouse and its immediate independent suburbs. It succeeds a previous district which had been created in 1992 with less powers than the current council. It combines the city of Toulouse and 24 independent communes, covering an area of 380 km� (147 sq. miles), totaling a population of 583,229 inhabitants (as of 1999 census), 67% of which live in the city of Toulouse proper. Due to local political feuds, the Greater Toulouse Council only hosts 61% of the population of the metropolitan area, the other independent suburbs having refused to join in.

The major political figure in Toulouse is Dominique Baudis, the charismatic mayor of Toulouse between 1983 and 2001, member of center-right UDF. First known as a journalist famous for his coverage of the war in Lebanon, 36 year-old Dominique Baudis succeeded his father Pierre Baudis in 1983 as mayor of Toulouse. (Pierre Baudis was mayor from 1971 to 1983.) The Baudis dynasty succeeded in turning Toulouse into a center-right stronghold, whereas historically the city was leaning to the left since the 19th century. Dominique Baudis is also known as a writer who wrote historical novels about the ancient counts of Toulouse, their crusade in the Middle East, and the Albigensian Crusade.

During his time as mayor, Toulouse's economy and population boomed. Baudis' policies were deliberately moderate, and he always tried to accommodate (opponents would say anesthetize) the left. He tried to strengthen the international role of Toulouse (such as its Airbus operations), as well as revive the cultural heritage of the city. The Occitan cross, flag of Languedoc and symbol of the counts of Toulouse, was chosen as the new flag of the city, instead of the traditional coat of arms of Toulouse (which included the lily flowers of the French monarchy). Many cultural institutions were created, in order to attract foreign expatriates and emphasize the city's past. For example, monuments dating from the time of the counts of Toulouse were restored, the city's symphonic concert hall was refurbished, a city theater was built, a Museum of Modern Art was founded, the Bemberg Foundation was established, a huge pop music concert venue (the largest outside Paris) was built, the space museum and educational park [[Cit� de l'Espace]] was founded, etc.

To deal with growth, major housing and transportation projects were launched. Perhaps the one for which Baudis is most famous is the subway of Toulouse: line A of the subway was opened in 1993, and Baudis succeeded in having work started on line B (scheduled to open in 2006), despite strong local opposition to the anticipated costs. The creation of a system of underground car parking structures in downtown Toulouse was sharply criticized by the Green Party, although it certainly fulfilled the demands of downtown Toulouse store and shop owners, and makes life easier for people who cannot use public transportation to go downtown. Today, even opponents cannot deny that the face of Toulouse has completely changed in the space of 20 years.

Despite all these massive undertakings, the city's economy proved so strong that Dominique Baudis was able to announce, in 1999, that the city had finished repaying its debt, making it the only large city in France ever to achieve solvency. In Europe, typical per capita city debt for a city the size of Toulouse is around 1,200 euros ($1,500). Achieving solvency was a long-standing goal for Baudis, who had said that he would extinguish city debt before leaving office. Local opposition, however, has criticized this achievement, saying that the task of governments is not to run zero-deficit, but to ensure the well-being of citizens, through social benefits, housing programs for poor people, etc. Despite the controversy, what remains certain is that the city has decreased local taxes in the recent years, due to the end of the burden of the debt, and Toulouse has one of the lowest level of taxation in Europe.

In 2000, Dominique Baudis was at the zenith of his popularity, with approval rates of 85%. To everyone's astonishment, he announced that he would not run for a fourth (6-year) term in 2001. He explained that with 3 terms he was already the longest-serving mayor of Toulouse since the French Revolution; he felt that change would be good for the city, and that the number of terms should be limited. He endorsed Philippe Douste-Blazy, then UDF mayor of Lourdes as his successor. Baudis has since been appointed president of the CSA ([[Conseil Sup�rieur de l'Audiovisuel]]) in Paris, the French equivalent of the American FCC.

Not as charismatic or well-know as Dominique Baudis, Philippe Douste-Blazy narrowly won in the 2001 elections, which saw the left making its best showing in decades. Douste-Blazy has had to deal with a reinvigorated political opposition, as well as with the dramatic explosion of the AZF plant in late 2001. Harboring national ambitions, unlike Baudis who always refused to become a national figure and preferred to focus on Toulouse, Douste-Blazy is often perceived as using Toulouse only as a springboard to launch his national political career in Paris.

Indeed, in March 2004 he entered the national government, and left Toulouse in the hands of his second-in-command Jean-Luc Moudenc, elected mayor by the municipal council. (Douste-Blazy remains president of the Greater Toulouse Council.) Jean-Luc Moudenc, however, does not command authority over his majority the way that Dominique Baudis did. Members of the majority fear that Toulouse could well elect a mayor from the left at the next (2007) election, and the figure of Baudis is largely missed. Indeed, his shadow still looms large over city hall, and many an insider murmurs that Baudis, who is still closely following local political events from Paris, will make his grand return to Toulouse in 2007.

Once a major metropolis of western Europe, Toulouse sank into a sleepy regional-level status in the 18th and 19th centuries, completely missing the Industrial Revolution. In the 20th century, relocation of key military and aerospace industries in Toulouse by the French central government have awakened the city again. In an ironic twist of history, what was once a big liability for Toulouse has now become its best asset: no Industrial Revolution meant a falling economic status for the city, but it has spared Toulouse the environmental damages and painful socio-economic restructuring that are plaguing so many northern European industrial cities.

Benefiting from its status as Europe's capital of aerospace industry, as well as from the flow of population from the industrial belt to the sunbelt of Europe, Toulouse metropolitan area doubled its population between 1960 and 2000 (in the meantime the population of France increased only by 30%). With good prospects for aerospace and biotech industries, growth is likely to continue in the near future. Toulouse is thus recovering step by step its former rank as a major European metropolis, but it faces increasing challenges: how to accommodate such a rapid growth, how to upgrade transport and develop housing and infrastructures, in short how to reinvent the city in the 21st century.

The main industries are aeronautics, space, electronics, information technology and biotechnology. Toulouse hosts one of the two main factories of Airbus.

The metro is driverless (automatic), the VAL system (V�hicule Automatique L�ger); the vehicles are rubber-tired.

The University of Toulouse (Université de Toulouse), established in 1230, is located here. It is today one of the largest university cities in France (second after Paris) with more than 110,000 students attending its 3 polytechnics and universities ([[Universit� Paul Sabatier]], [[Universit� Toulouse Le Mirail]], Arsenal), and engineering schools (SUPAERO, ENSICA, ENAC, ENSEEIHT, INSA, INPT, ...) 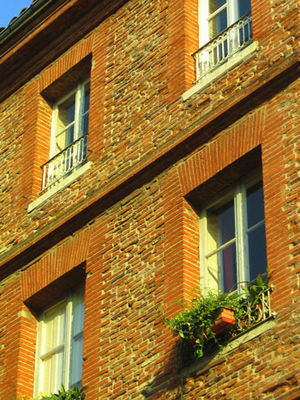 A "Pink City" apartment at sunset

Toulouse, known as the Ville Rose ("Pink City") for its distinctive brick architecture, is host to a rich and diverse culture. It has a thriving scene of unusually beautiful graffiti, with the painter Miss Van at its forefront. In sports, it boasts a respected rugby team, Stade Toulousain, which has been a three-time finalist and two-time winner in Europe's top club competition in the sport, the Heineken Cup.

Toulouse was the home of [[Antoine de Saint-Exup�ry]] (1900-1944), most famous for his book Le Petit Prince (The Little Prince). There is a permanent gallery with numerous photos, and some of his works, located in the Hotel du Grand Balcon--just off the Place du Capitole--where he stayed. (The bohemian painter Henri de Toulouse-Lautrec, lived in Paris and shared only his name with Toulouse).

The city's gastronomic specialties include saucisses de Toulouse, a type of sausage; and cassoulet, a bean and pork stew.